‘Gardening is humbling. You can make a house look exactly as you want it, but gardens never quite turn out the way you expect.’ Top US interior designer, Thomas Pheasant told me this years ago.

However, I forgot his wise words when we moved from a London courtyard to a fifth of an acre in Kent. We wanted a larger garden for the children to play in. We could grow vegetables, and imagined sitting out with a glass of wine, surrounded by greenery rather than brick walls. After all, we’d bought a house with a lovely, well-designed mature garden, so all the hard work had been done for us.

How our garden looks now, after following the tips below

I soon discovered what Thomas Pheasant meant. For six years, we lived quite happily with our predecessors’ decoration in the house. But, in the garden, six weeks was enough for chaos to take over. Shrubs died or went rampant. Climbers tried to strangle us. I was chased down the path by the tendrils of a volunteer squash from the compost bin. The only area I could cope with was the veg bed, because it was empty when I arrived. I went on a Sarah Raven Grow Your Own course, and we ate our own courgettes and beans.

I think this is a very ‘middle-sized garden’ problem – if you buy somewhere with a really big garden, you know you need to spend time and money on it. And there is a limit to how much chaos a courtyard can cause. But we middle-sizers can suddenly find ourselves overwhelmed by own our gardens.

Three great tips to the rescue

1) from horticulturalist friend, Will Denne, of Tasteful Plants: ‘Just weed and mulch for the first year’. I did short, regular sessions. Getting my hands dirty and working close up helped me see plants as individuals, rather than as a terrifying jungle.

2) ‘Specialise in one plant’ – in my case, dahlias, which I’d fallen in love with during the Sarah Raven course. The garden was largely shrub-based, and dahlias turned out to be able to compete with mature shrubs – and offer some instant ‘wow’ factor – while annuals just died or grew spindly. I leave dahlias in all year round – Rip City, Jescot Julie and Black Cat seem particularly hardy.

3) also from Will Denne – ‘Ultimately, in a garden the size of yours, you can’t fanny around.’ In our first few years, we tinkered with a bed here and there, losing the original designer’s vision, but never really making it our own. Eventually we sat down over a glass of wine with a landscape consultant friend, Matt Jackson, and drew up a new plan on the back of envelope.

It is a walled garden, and the previous design had curved beds, softening the straight lines of the old garden walls. We decided to go in the opposite direction, and create a geometric parterre that echoed the house, which is Georgian, with four rooms on each floor. To one side is the biggest flower bed (full of dahlias), in front of the kitchen window so we can enjoy it all year round. And we made more space for veg.

Someone who knew our predecessors came round the other day. ‘I know this garden well,’ she said. ‘I’m glad to see you haven’t changed it much.’ Have a look at the pix – what could I have said in reply? 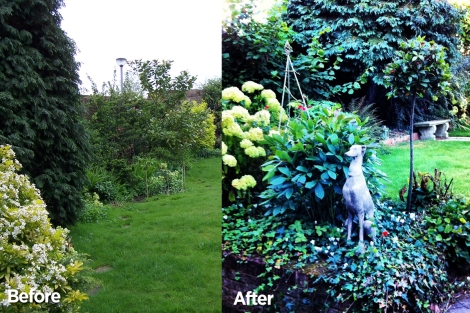 5 responses to “How to take (some) control of your garden”

Stay updated with our Tweets