As soon as she came home from school yesterday my youngest daughter (4) told me that she wanted to ‘go and find nature things’. Her elder sister was at an after school club and the sun was shining so it was a good time for a nature trail. We keep a little basket near the front door for collecting and she ran to fetch it at top speed.

First in her list of treasures were daisies. I’m afraid to say that we don’t always keep the verge in front of our cottage very well mown. The daisy population is thriving, and if we’re especially lazy buttercups, plaintain and sometimes hop-flowered trefoil emerge too. She went to work picking daisies for her basket. The ones with pink-edged petals are the most highly-prized. Once she was satisfied we made our way up the dirt track to the wood.

In high summer this track is lined with poppies but just now there are is blackthorn blossom in the hedgerows and garlic mustard (jack by the hedge) and cow parsley are just about to break into flower. Youngest bagged a dandelion and then spotted the blossom. ‘Mummy! Let’s get some!’ 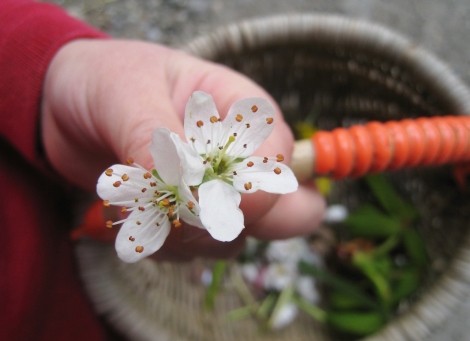 At this point I explained that if we picked the blossom then her favourite tiny plums wouldn’t come later in the year, so we agreed that we’d just pick up any blossom that had fallen to the ground. She was satisfied with that. At this point we found an empty snail shell. ‘The snail must have found another house Mummy.’ I didn’t like to correct her.

Next she came across some twigs. ‘I want some clean ones Mummy, I don’t like these lumpy green ones.’ I explained that the green lumpy stuff was lichen, that it was a special kind of plant and it meant that the air in the wood was very clean. That seemed to make it just about desirable enough so several lichen-covered sticks went into the basket.

Finally we reached the gate that both my girls like to climb on. Beyond it is ‘the buttercup meadow’. There’s a fantastic population of hop-flowered trefoil here, but most excitingly there are several plants of wild salsify or ‘Jack-go-to-bed-at-noon’. Who was Jack I wonder? Sometimes he was by the hedge, sometimes in the pulpit. I asked on Twitter – apparently he represents everyone.

We picked one or two buttercups. I reasoned that this was alright since there are literally thousands of plants growing here. Then we returned home to make a tiny nature ‘table’ (on a vintage enamel plate). The demise of the school nature table is something that many of us mourn but making one at home can be just as fun and we’re very pleased with ours.

Note: We live in a rural village but we didn’t find anything very exotic on our walk. Parks are just as good for finding items for a nature table.

8 responses to “A Spring Nature Trail”

Stay updated with our Tweets